At lunch break today I finally dared to switch on my home made valve (tube) guitar amplifier and to my work mates surprise and my relief no bang, smoke or sizzling noises! So I connected it temporarily to the PC's sound and it came out loud and clear with NO hum! Can't wait to plug a guitar into it! Tomorrow I have to take multiple voltage measurements and do some maths to work out how hard the new tubes are working -too lower wattage and they won't sound their best-too much and they won't last as long. Then I can see if I can get the final (or first) tube working, it's just an option and can be switched in and out but I'm still a couple of components short. I've learnt so much already by building this thing!
Posted by Andy Stone at 12:01 No comments: 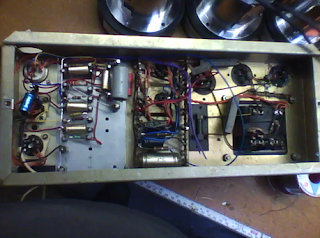 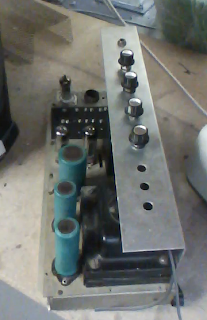 The valve amplifier is coming together nicely, as most of it is over 40 years old I'm hunting through my parts to try to keep it vintage looking. Although it is a separate head the controls are on the top like a Vox so I can access them easily, putting them on the front only seems to make sense if it is up high on a huge speaker stack and I assure you it won't be! I'll keep you updated and maybe post a video once it's all working.
Hopefully at my next gig at Gary's Club I can play my own songs on my homemade guitars AND amp
Optional techie bit;
The chassis came from the remains of an Armstrong 127m stereo tuner/amplifier, it originally used ECL86 triode-pentode valves but these are hard to find and not as good as the EL84s pentodes which are found in most smaller British amps so I have rewired the holders for El84s and added a separate ECC83/12AX7 for the two triodes (Driver/phase splitter stage) Also I want to add a switchable EF86 pentode at the input try try and capture some of that VOX chime but I'll add that later.-The rectifier is solid state. THe whole thing should push out 10 watts in A class, I'm not too worried about distortion though a nice overdrive would be a plus.
Posted by Andy Stone at 03:41 No comments: 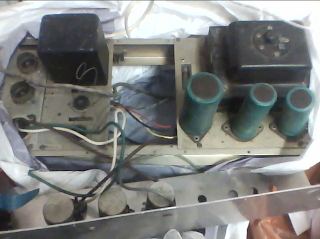 Junk? Oh nooo! Gold dust! This is the remains of a guitar amp I built about 20 years ago from the remains of a valve hifi amp from the 1960's! I found it in the attic and I'm rebuilding it and converting it to take readily available (and better) valves. It's a 10 watt class A amp that is similar to a Vox AC10 except it hasn't got the EF86 valve (tube) in the preamp so I'm planning to add one. No I haven't finished the last amp yet! I'm building these in the warm at work during my lunch breaks and come the spring I should have two working ones to take out to the shed and put into cabinets!
Posted by Andy Stone at 11:23 No comments:

A new year and new projects to build!

LET ME START BY WISHING ALL MY FRIENDS A HAPPY 2010!
2010? It it doesn't look like a date does it? More like something out of Star Trek! Star date 2010-- thing is I've just seen Bernard Cribbens on Dr Who acting like Luke Skywalker what is going on?
Anyhow I have a couple of nearly empty roses chocolate tins on the kitchen table, anyone got ideas what to do with them?
Actually I'm starting the year with at least potential six projects waiting to be built! I have 3 (no make that 2 as I have to build a ukulele for a friend) cigar boxes and one larger wooden box waiting to become various strange woodsy acoustic instruments. Also my newly rebuilt 100 watt sold state guitar amp has been tested and is all working that is except the swanky 5 control tone mixing circuit which needs sorting! And also I unearthed over the Christmas break a valve (or tube) amplifier I built about 20 years ago from some ancient hifi equipment Some of the valves are missing though and are hard to find nowadays so I needs to redesign it a little- I think i know what I'm doing!
All shall be blogged as usual! Just don't tell my wife as I'm rapidly running out of space! That's the good thing about song writing!
Posted by Andy Stone at 13:38 No comments: