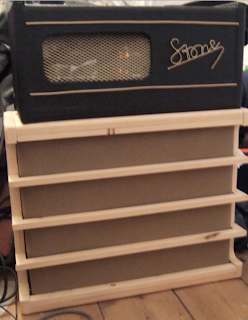 I have to post this picture of the cabinet with the tapestry grill fitted! Just when it felt spring was around the corner the good old British weather has got wet and cold again! It's like February! I went out to the shed and hastily fitted the cloth and moved it all back indoors -so I can at least play it. It's supposed to get colder and stay that way for Easter. :( When the weather warms up I will finish shaping the woodwork and cover it to match the amp. (though I think it doesn't look bad in bare wood)
Posted by Andy Stone at 09:35 1 comment:

I visited my local branch of Hobbycraft in my lunch break looking for that elusive speaker cloth and the only thing I thought might do was hessian which I could lightly spray paint to the desired colour. But while lining up to ask the shop assistant to cut some off for me something caught my eye lying on the counter. BINGO! Strong -a dull Browny gold in colour –square open weave- TAPESTY cloth! It’s perfect like it’s been manufactured to my specification! And £9.99/meter (half the price of real speaker cloth) Photos to follow!
Posted by Andy Stone at 05:09 No comments: 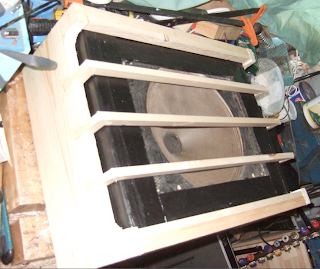 My next task is to find some cloth to stretch over the baffle that I have just painted black, not easy because I don't want it to look like a standard guitar amplifier. Then to route curves on the edges of the cabinet like wise file off the sharp edges off the three bars and paint them black. I guess it will look like a negative of what you see here! ...I've just routed those curves! 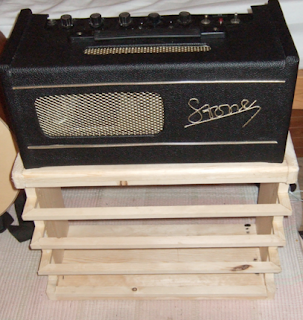 I'm wondering if I should have made it the same size as the amplifier head now, oh well it's too late!
Posted by Andy Stone at 06:41 No comments:

The baffle wasn't baffling at all!

As it turns out with very little modification the baffle from my old amplifier fits perfectly! It couldn't have worked out better if I had measured it!
I told you my plans would change! Btw It's called a baffles imply because it baffles the unwanted sound from the back of the speaker. 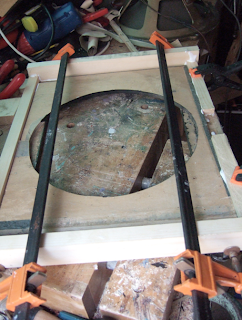 The speaker cabinet being glued together. The slats are only hanging there temporarily just to give me an idea what they'll look like. You can tell I've had to improvise because I'm short of long clamps! 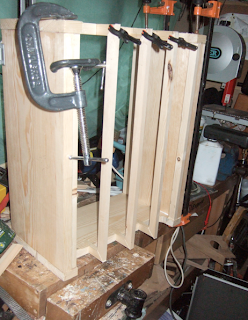 I'll turn the photo around so it's the right way up to give you a better idea what it will look like. 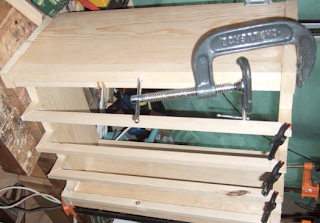 The baffle that the actual speaker fits into won't be conventional either, what is the point of cutting a huge hole in a large peice of ply just to throw most of it away? I'll mount it on blocks than fill the four corners in with small triangular pieces and have an upright at each end for the fabric to stretch around, well that's the plan but my plans always seem to change!
Posted by Andy Stone at 10:48 No comments: 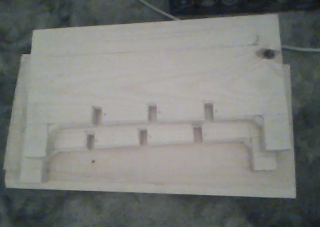 Just a quick update:
The sides resting on the top and bottom of my speaker,I guess it's the pine that makes it look like an Ikea flat pack.
The bars go into those cut outs to give them some rigidity.
Posted by Andy Stone at 13:53 No comments: 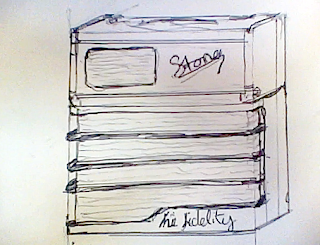 It's a little more difficult to build but I'm thinking of a design with gold speaker cloth that wraps around the corners with three black bars that protect it , this means that I can use ordinary material for the cloth as it only has to keep dust out is far cheaper and I get far more choice of styles, I don't anything to be recognized as looking like it from anther manufacturer eg Marshall or Vox,I want my gear to look different and eye catching! The words Hi Fidelity are a nod towards it's origins and are true too, rather out of the ordinary for a guitar amplifier!
Posted by Andy Stone at 09:52 2 comments: 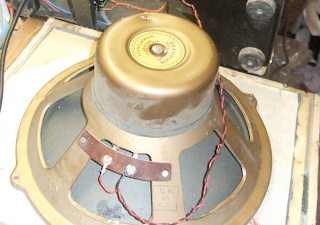 Next job is to build a matching speaker cabinet. I have a 12" British made Grampian speaker from about 1960 it came with a rather rubbish RSC valve amp and was then used with my Selmer Treble 'n' Bass, later it was built into my homemade MOSFET amp.
I was concerned that I couldn't use it because a check with my multimeter revealed it was 12.5 ohms and not 4,8, or 16 which I have tappings for on the new amp. but this is it's resistance during DC reading-direct current and not it's AC (alternating current) impedance which gets higher with frequency (and you can't get lower bass than DC!) To get the correct impedance multiply by 1.3 = 16.25 ohms!Plenty good enough! A 12" speaker is much more efficient than a smaller one just because the same coil is moving a bigger cone and therefore more air and at a mere 15-17 watts I think it'll need this when I gig it in a large hall. (Gary's Club in June!)

So I'm planning on carrying on the black and gold theme and partly to save costs rather than buying proper speaker cloth I will use something thinner this will also give me more choice so I can find something more original than the usual Fender or Marshall cloth and I'll fit bars across it to protect it. This weekend I'll look in my local timber merchant for pine to build the cabinet.

PS Am testing the 12" speaker, it sounds far more open and clear than the smaller one but is somehow less jazzy and has far less bass at domestic volumes. But you should hear it when I crank it up a little......clear punchy defined bass wow! I was a little disappointed with the smaller one at the church evening bcz it sounded boxy.
Posted by Andy Stone at 04:29 No comments: 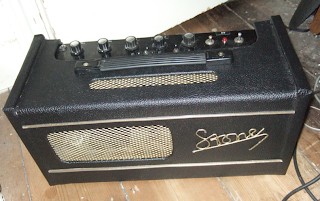 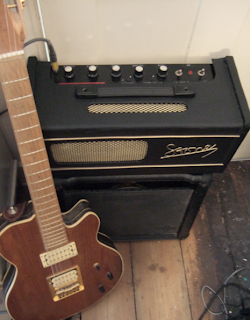 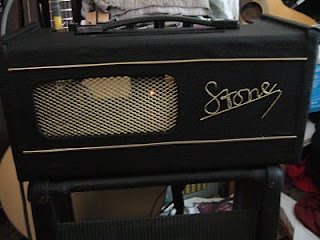 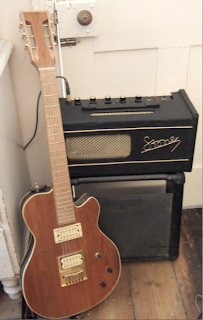 I got a little handy with the vinyl covering this morning and actual quite enjoyed the whole process! It's not like painting or varnishing as soon as it's stuck it's done! Instant gratification! I think with a little more practice I could do a perfect job but I'm pleased enough with what I have achieved. The badge is made from three lengths of tin-copper wire twisted together in a drill then bent with pliers and painted. The whole effect reminds me of British Norton and Vellocette motor bikes. :0)
Posted by Andy Stone at 11:04 1 comment: 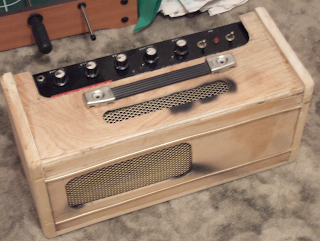 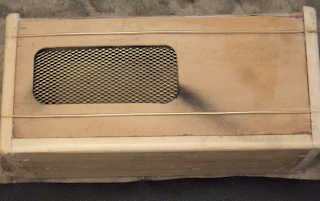 Plan C!
Despite saying they had one length of Vox basket weave covering in stock I got a call from Kate at Allparts UK saying when she went to pull it off the roll it was far too short. So I changed my order to a pretty standard black Fender covering which is fine. I may even have enough to make a matching speaker cab, I'll see.
To break up the black on the front panel I've decided to fit two gold lengths of piping. I felt like a bit of a vandal today as I cut those two deep slots into the front of the cabinet, maybe because two sections of the ply panel came loose, one has fallen off! Probably because I didn't clamp it properly while drying. Any how does my amp look (British) 60's or what!Well the way I (just) remember it anyway! (Btw the slots left from sawing in the sides are filled, the piping only goes across the middle panel and no the piping isn't glued in yet) Can't wait to see the full effect but MUST take my time!
Posted by Andy Stone at 09:22 No comments: 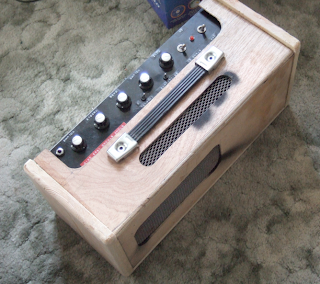 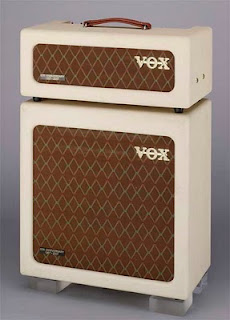 I only discovered this Vox amp a couple of weeks ago and am disturbed by it’s similarities to mine, I wanted to make something original not just copy an existing design!
It's not just cosmetic either. It has a similar output using the same tubes , an EF86 tube channel (with a single tone control) that I know I borrowed from Vox but also has the second ECC83/12AX7 channel with treble and bass controls with the panel laid out in a very similar way. I know there is only so many ways to build an amplifier but this is eerie!
Ok the differences: Mine was 95% made in England. (Only the two small toggle switches and the two Russian EL84 tubes weren’t!)
Mine is vintage- a little rearranged maybe !
Mine was once a hifi so uses negative feedback so doesn’t distort, that may sound like I’m missing out on the holy grail of tube amp design but it still sounds like a vintage rock’n’roll amp and can be used for jazz too, yesterday I discovered it makes a pretty good bass amp, something you can’t do if it distorts!
(I’ll use my home made - from 60’s parts - Range Master and Tone Bender for that!)
Posted by Andy Stone at 04:34 No comments:

After much searching I can't find the coloured 60's style covering I want anywhere so I have a new much simpler plan:
Cover the amp in black Vox type material so it matches my digital Vox AD30 combo. Remove the amplifier chassis and Vox handle and badge from the AD30 and convert it into a plain speaker cabinet making it a new full height speaker baffle with a proper cloth (I hate that steel grill!!) The only fly in the ointment is that it is just a fraction narrower (less than half an inch) than the new amplifier head I just hope it won't look top heavy but I can't have everything!
Then make a new head cabinet for the old digital chassis,and fit the Vox badge etc. This way I have plenty of flexibility, I can use either amp head with the speaker and use the Vox amp to power the rotary speaker!(This sounds far better than it's existing one I've tried it!)
Then add some gold colour piping to set off the black (the tube amp will have gold ventilation gills) and make the whole set up look more classy!:)
Posted by Andy Stone at 04:33 No comments: