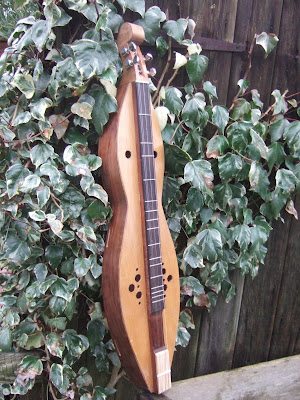 The cold weather on Saturday stopped me rushing to get the strings on so I put a coat of varnish on a retaired back into the house. By Sunday it was dry enough for me to drill out the holes for the string retaining pins and...........................let's cut to the chase, it sounds amazing!!!! Ok not quite as pretty as the £250 I tested in the shop I bought my strings from but as good as any recording I've heard and pretty loud too! I've been picking out tunes all evening.
I've a few things to go back and finish ,I'll do the high fret lunch time and later varnish the back, fit a piece of wood at the base of the headstock etc but I think I'll put those things off while I learn something to play for the open floor at the folk club next Sunday.
Posted by Andy Stone at 00:28 No comments:

My dulcimer finally in one piece! 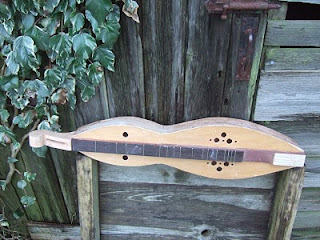 It's nice to finally have my dulcimer in one peice! There are a few jobs to be done, the main one is to chisel the peg head slot into more of a wedge shape to give the strings clearance also there are a few problems to over come like repair the corner where the top has been cut too small (Duh) and I've discoved that the sides are only stained and if you even some much as touch them with a tool they need to be touched up. But I think it will scrub up nicely when it is varnished (or laquered) Being plywoodI'm not expecting too much in the way of bright tone but I held a string on an electric guitar on the bridge and it sounded pretty loud. One thing that seperates a dulc from a guitar is that a ducimer's top is not a structual part so does not effect sustain, the body is simply a sound box, an acoustic amplifier if you like, the structusal part is called the staff, mine has a peice of mahogany running all the way from the nut to the bridge. Can't wait to get it strung up!
Posted by Andy Stone at 01:12 No comments: 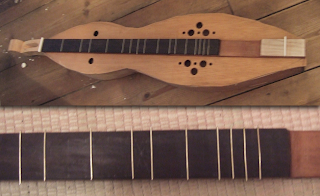 Can you see it?
I only noticed I'd cut the end of my dulcimer finger board out of true once I'd actually fitted the frets and they were all on the....slant! It won't effect the way it plays but will probably annoy me every time I look at it! Aghhhh well!'ll have to live with it I'm sure the original Appellation dulcimers with bailing wire for frets weren't 100% perfect! By the way the top hasn't been fitted yet so sides have not been trimmed to shape and no I haven't forgotten the dot markers, it's not having any.
Posted by Andy Stone at 12:02 No comments: 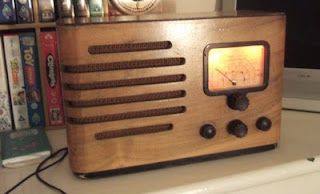 American readers please note: valve = tube.
Back in the 1970’s jumble sales where a regular charily fund raiser, unfortunately after a while the quality of the jumble went down and down as the majority of the pile of old clothes and broken toys appeared at each subsequent sale and jumble sale got the stigma of being junk sales. The answer was to re brand it as “good as new “ sales or table top sales which if you read between the lines means we don’t want heaving piles of junk, only some select stuff so we can still see the table top! Of course this was all before people thought about keeping the money for themselves and invented the car boot sale. But jumble sales were if nothing else cheap! I can remember at the age of about 12 going to almost every church jumble sale with 10p in my pocket , not too early mind you, I didn’t want to get caught up in the stampede of old biddies shoving their way to the front as soon as doors opened! I was there in the hope there would be an interesting radio for sale, perfectly serviceable valve radios or wirelesses where discarded in their thousands!, the 70's where all about looking forward to the future; tomorrows world; solid state transistorised electronics, the status symbols of the day were colour TV and a shiny new Fidelity music centre. By the way our family didn’t have a TV my parents decided that it was an unsociable time waster, I have to agree. (Though a do have one) but back then there was more to listen to on the radio, I’d listen to Radio 1 but mainly the pirate station Radio Caroline transmitted from a rusty old hulk of a ship out in the North Sea! (The MV Mi Amigo - sank in 1980) Of course I could have listened on a transistor portable but I loved these seemingly ancient valve sets (they where only 20-30 years old), I guess they shared a lot in common with my other passion- steam engines!.I loved tinkering and restoring things, there where seemingly infinite design variations, they weren’t the cold lifeless technology we are used to today, these things had a warm glow, warm sound and contained potentially lethal voltages! Before long my Dad put up more shelves in my room for my collection which totalled 14 I believe though I’ve forgotten some and can only recall 9. Strangely enough my favourite was a Frankenstein’s Monster of a set , a bare chassis from a radio gram so it had no cabinet or for that matter an amplifier or power supply, these must have been separate unit probably at the bottom, so to make it function it was permanently wired to a set my parents gave to me that I only remember acting as a record player amplifier since my Dad’s friend tried to tweak it’s alignment to make it more sensitive and broke a coil slug. It was an expensive set too!
There where several reasons why I got rid of them, they took up a lot of space, we were about to move house and most of all I wanted hifi equipment…valve hifi equipment! My school friend Colin had a similar collection but his came not from jumble sales but from the local amenity dump, I say local but he would think nothing of carrying a huge radio or tape recorder almost as heavy as he was the four miles back to his house! We used to put them at the end of the garden plugged into a long extension lead plugged it into a socket in the shed a safe distance away then we would flick the wall switch and wait... usually we'd hear static and had to dare to get close enough to tune the thing in, nearly every set worked perfectly.
Colin had two things I wanted: A 1961 Ferrograph series 4 reel to reel tape recorder and better still a pair of Quad 2 valve hifi power amplifiers!! :) So in 1977 (or was it 78?) a deal was struck.

Colin and I lost touch until last year when I found his facebook profile...with photos of some of my old radios on it! I was always a little sad that i didn't keep just one so I put a comment on a little 1946 set saying if he wanted to sell it I'd be interested, at first he declined because for the same reasons I chose it (it was small) then a few days a go he said it was mine! I picked it up at lunch time from his work place just round the corner from mine. We had a good old chat and about 33 years later the IR Aria 461 is back in my ownership... and it still works perfectly! Which is fine if you want to listen to talk sport which seems to be about the only Uk station left on medium wave.
I found out a little info about it from a guy who’s selling one on the net.
Aria ( Radio Industries) was a small radio manufacturer based in Croydon. The 461 was a cheap post war (1946) model manufactured for the most part with ex war materials. The set came in the one model shape but in many colours. Most were white however. I have not seen a natural wood finish before. Perhaps they did make one or perhaps the paint finish was removed at some time and stained and polished as in your version. They were not the best of sets in regard to selectivity and sensitivity and need an aerial a mile long to do justice. But the set you have looks to be in fine condition and I am sure that at 63 years old she continues to work well,

I remember now it wasn't a patch on my 1946 Cossor but in the 80’s I purchased an Eddystone 940 communication receiver for short wave listening , at the age of 65 it's more of an ornament now and prettier than the Cossor also I like the rarity aspect and local connection. This time round I understand nostalgia!

Thanks Col if you're reading this! I'll be round to visit the others soon!
Posted by Andy Stone at 03:55 1 comment: