Going For A Spin

It's been a while since I posted a music related blog here but things have been quiet and my dulcimer project has been side lined in favour of my youth group work (See Fleet Of Footies blog) Anyway I played a cover of a Jamie Cullum song at the folk club last night, no not someone you'd associate with folk or the electric guitar, not that every thing that is played at the club is strictly folk, it's nice to have a little variation too. But "All At Sea" is one of his more laid back numbers which inspired me when watched him play it live with an orchestra at the proms, with rain effects created by to blokes dressed as fishermen holding up punctured containers of water, I attempted to recreate an atmospheric sound with the whirl of my rotary speaker, I'd never taken it to the club before because I considered it to be too gimmicky but it turns out it's mellow non directinal singing sound exactly fits the bill, it got several compliments! Btw It's blue paint work meant it even blended in with the furniture. In fact they seemed to like the Les Pew more too, during the interval a couple of people had a play of it, something that's never happened before. One thing about the rotatary speaker is nobody is ever in it's direct line of fire (for too long) as they would be with a fixed speaker and also I hear exactly the same effect and similar volume when I'm sitting right over it. Next time I think I'll play something more outright jazzy, it sounds soooo good if you play anything with major and minor 7th chords in it! Only thing is I think I need to put wheels on it! It's a really awkward to carry- I still havn't unloaded it from the car yet.
Posted by Andy Stone at 04:47 No comments:

Check out my new blog - Fleet Of Footys here!
http://fleetoffootys.blogspot.com/
Posted by Andy Stone at 03:59 No comments:

more of the same 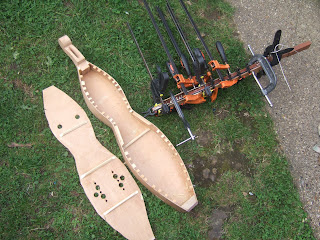 The dulcimer is progressing quickly, yes my lining blocks are unevenly spaced but I'll hopefully never see them again once the top is glued down, which I must resist doing until I glue the staff & fingerboard on to it because it'll be easier to clamp. Not everything has gone to plan, the sides slope inwards just forward of the waist but I can't give up now!


The glider is finished and has been tested by being hand launched now the sky's the limit!