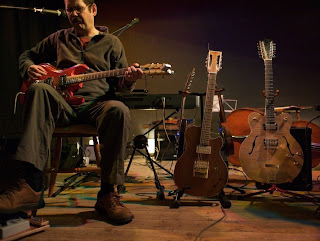 Welcome to my blog!
This is more of a guitar creations blog than a creating bcz I have already built a collection of rather individual electric instruments and have virtually - no actually run out of room for any more! Though there might be a headless travel ukulele in the pipe line, I'm not joking!
As I'm not really interested in building more to sell the next step is to get out gigging more with both the guitars, equipment and my own songs. Despite building and playing electric guitars I am not a rock player but am into folk, Americana and a little jazz.
Anyhow I'll mix together some of my previous guitar build blogs from myspace (including the progress of my homemade rotatory speaker) and anything music related that I feel I want to share with you.
First let me introduce you to my main guitar- The Les Pew!

My guitar is...The "Les Pew"My guitar is-- "The Les Pew"Written for Guitarist Magazine (UK) in 2007 for their unusual readers guitars column

When my church decided reorder their building to make it more lighter, warmer and adaptable for the 21st century they decided to remove the Victorian pews from their building I bought one for my kitchen but they only came in seven foot lengths, so I decided to shorten it to fit into my cottage but what would I do with the remaining wood? Being an amateur guitar maker after making a 12 string semi at a adult education course I had toyed with idea of building the body of a guitar from one but didn't think that pine was a suitable tone wood but with reassurance from a luthier on the internet I went ahead.I was keen to leave the original finish on the back and front, the top is the back rest of the pew and the back the seat.I'm not exactly a conventional player as I love electics but play with my fingers (No I'm not Jeff Beck) I just that I don't get on with electro-acoustics and prefer the longer sustain you get from an electric guitar. So I decided to build a semi but a 14th fret neck-body join to aid tone/stabilty. The headstock is a visual clue to it's more traditional past existence.The tone is incredible! I guess somewhere between an acoustic and an arch top, very full and warm yet defined and crisp. Pine is a wonderful tone wood, I often play it at my local folk club.